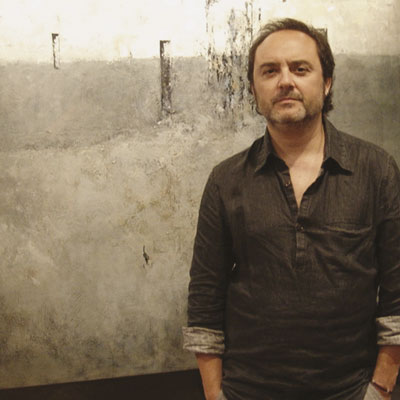 Tomàs Sunyol was born in 1964 in Dieulefit (France), a little town where his family moved from Catalunia to escape the political situation of that period. He spent most of his childhood in Provence, but when he returned to his native town, Badalona, he regained his land and identity. He succeeded in this process through the intimate observation of the narrow streets of the town, bounded by houses which, even if sometimes can only be guessed, generate the curves and unexpected lights which perfectly describe the place. Tomàs Suñol's painting lies within a fascinating balance between abstraction and reality, where details lead beyond the limits of visible. Shadow and colour create compositions where expressive power and poetry confront in a perfectly balanced way. Colours are created by light rather than on the palette, it is still light that, denying chromatic changes, defines spaces. Surfaces are interrupted, cut by only perceivable lines and dark slits, which tell about a subject made up of houses placed one against the other, shady or sunny roads, unseen but still present humanity. During his artistic career he has taken part in many solo and group exhibitions and has participated in Art Fairs in Europe, United States, China and Japan. His paintings are part of private collections all over the world. He lives and works in Badalona, Spain.