In “Almost True Tales”, Brian Keith Stephens explores his fascination with animals as mythic symbols across time and culture. In vibrant, figurative paintings, Stephens draws on legends, fables and folk tales from around the world to invest his animal subjects with meaning and emotion, revealing a common cultural language that resonates with children and adults alike. At a time when the constant and omnipresent flow of information makes it harder than ever to identify what is true, Stephens’ work encourages viewers to recall the simple human virtues embodied by animals in countless tales. These enduring folk wisdoms are a source of solace and a reminder that decency can prevail and help the world to heal in even the most difficult times. 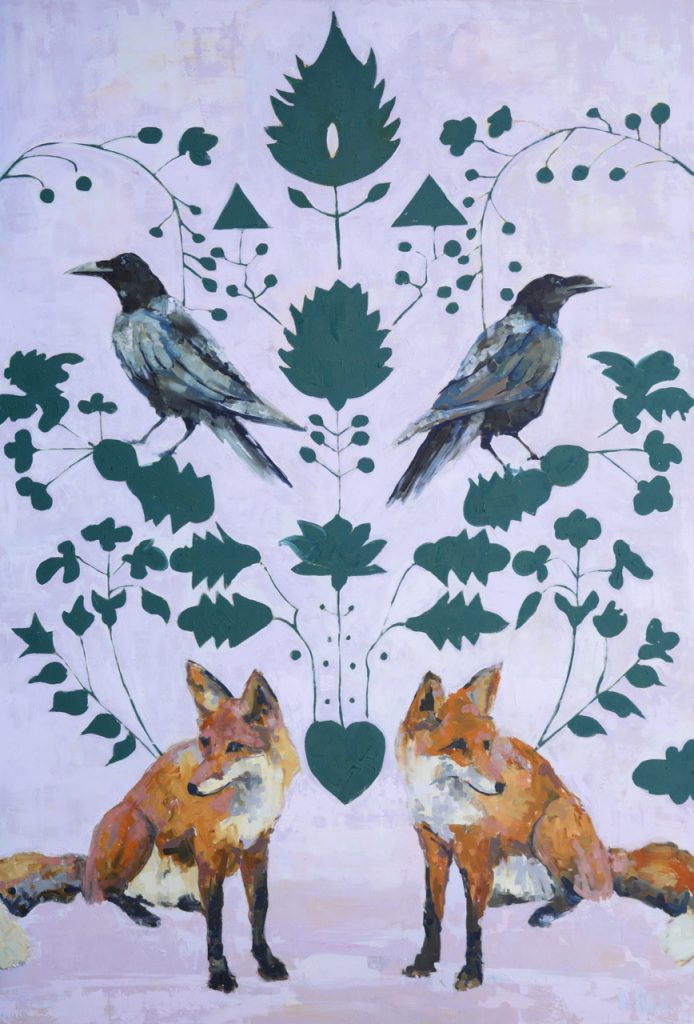 A Crow was sitting on a branch of a tree with a piece of cheese in her beak when a Fox observed her and set his wits to work to discover some way of getting the cheese. Coming and standing under the tree he looked up and said, “What a noble bird I see above me! Her beauty is without equal, the hue of her plumage exquisite. If only her voice is as sweet as her looks are fair, she ought without doubt to be Queen of the Birds.” The Crow was hugely flattered by this, and just to show the Fox that she could sing she gave a loud caw. Down came the cheese, of course, and the Fox, snatching it up, said, “You have a voice, madam, I see: what you want is wits.”

Aesop “The Crow and the Swan”

A Crow was filled with envy on seeing the beautiful white plumage of a Swan, and thought it was due to the water in which the Swan constantly bathed and swam. So he left the neighborhood of the altars, where he got his living by picking up bits of the meat offered in sacrifice, and went and lived among the pools and streams. But though he bathed and washed his feathers many times a day, he didn’t make them any whiter, and at last died of hunger into the bargain.

a kind of magic