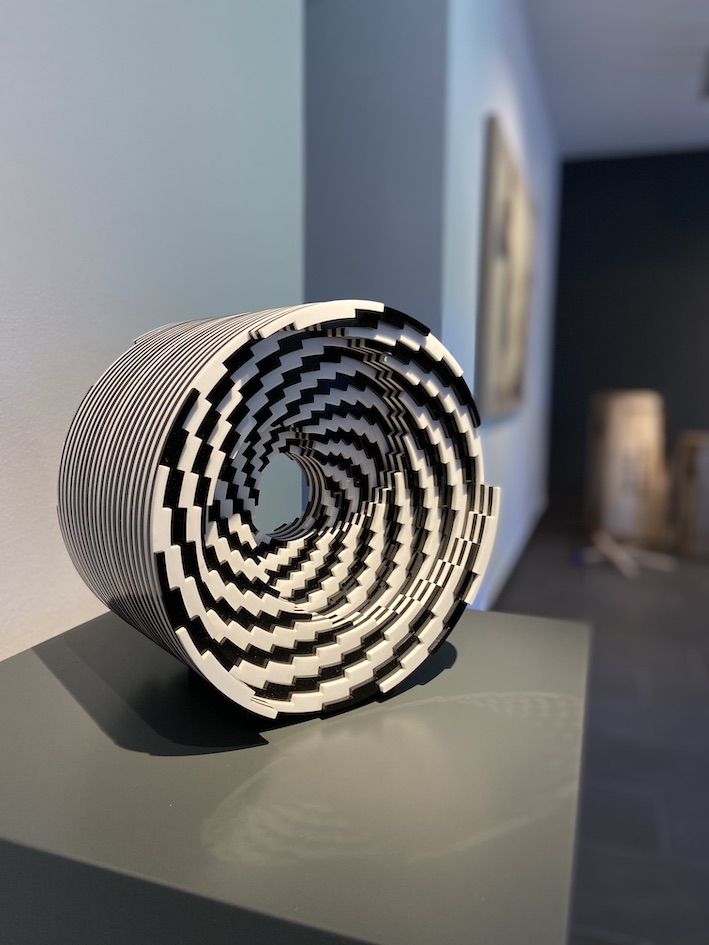 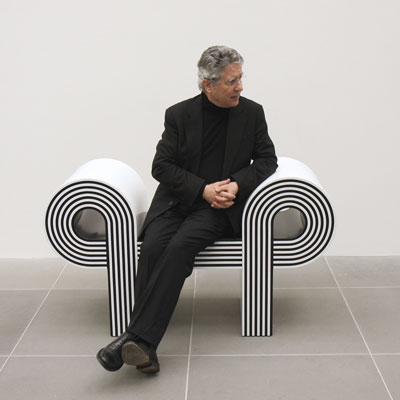 Marcello Morandini was born in Mantua on the 15th of May 1940. He moved to Varese in 1947. He attended the Brera Art Academy in Milan where he also worked as an assistant designer for an industry and as a graphic artist for a professional studio. The first drawings with direct reference to his artistic research date to 1962. In 1964 he began his first three-dimensional works, exhibited in 1965 in his first one-man exhibition held in Genoa, curated by Germano Celant. 1967 saw his first important exhibitions in Milan, Frankfurt and Cologne. In the same year he was at the IX Biennial of Sao Paolo in Brazil. In 1968 he was invited with a personal room in the Italian Pavilion to the XXXIV Venice International Biennial. In 1969 he was invited to represent Italian art in Brussels as part of the Europalia exhibitions.

In 1970 he began a collaboration with the gallery owner Carl Lazlo in Basle. Thanks to this collaboration in 1972 the artist held his important one-person exhibition at the Kestnergesellschaft in Hanover. In 1974 he planned a city square with a diameter of 30 metres for the INA commercial centre in Varese. In 1977 he was invited to Documenta 6 in Kassel. At the Civic Museums of Varese he organized with H. Heinz Holz the second "International Symposium of Constructive Art Studies". In 1978 he held another six one-man exhibitions in museums in Italy, Austria, Sweden and Germany. In 1979 he had the first of the three one-man exhibitions dedicated to his work by the Wilhelm-Hack-Museum in Ludwigshafen (the other two followed in 1994 and 2005).

In the first years of the 1980s he began a long collaboration with the architectural studios of Mario Miraglia in Varese and Ong & Ong in Singapore where he remained for long periods, working on some important architectural projects such as the 38-floor Goldhill Center. In 1982, together with Attilio Marcolli, he was invited to "Documenta Urbana" in Kassel. In the same year he was awarded a scholarship by DAAD for a sojourn of three months in Berlin. In 1984 he held his first exhibition of "art and design" at the Museo della Ceramica in Cerro di Laveno (Varese). During the same year he was invited to Japan. This period saw the beginning of personal contacts with architectural studios, visits to a number of universities and exhibitions in diverse museums, supervised by the publisher and gallery owner Masaomi Unagami (Tokyo). In the same year in Germany he created the project for the facade of 220 metres for the Thomas porcelain factory in Speichersdorf. In 1985 he organized three important exhibitions: the first was at the Axis in Tokyo; then a retrospective exhibition at the Museum Bochum; and finally one in Verona, at the Museo di Castelvecchio. In 1986-1987 he continued his exhibition activity in Darmstadt, Düsseldorf, Mannheim and Helsinki. 1987 was also a period of a fecund collaboration with the Rosenthal Company in Selb (Bavaria) for which he studied the facade of 64 metres for the company's new administrative building. In 1988 Peter Volkwein, the director of the Ingolstadt Museum, commissioned a project for a sculpture of 40 metres as the external symbol of the museum.

In 1991 he spent a long period in Kuala Lumpur in Malaysia in order to create the architectural project for a commercial building of 34 floors. In 1993 he held his first important anthological exhibition of art and design at the Die Neue Sammlung Museum in Munich. The following year it was reproposed at the Palácio Galveias during "Lisbon: European Capital of Culture". In 1994 he was appointed member to the jury of the Essen Design Center. In the same year he was appointed president of the International Museum of Ceramic Design in Cerro di Laveno (Varese). From 1995 to 1997 he held the position of professor of art and design at the Summer Academy in Salzburg. From 1997 until 2001 he was Visiting Professor at the Écal School in Lausanne. In 1998 his daughter, Maria Enza was born. From this point he mainly concentrated his work in Varese, which in 2000 dedicated an important retrospective exhibition to the artist in the museum of the city, accompanied by a catalogue published by Charta (Milan).

In 2000 he began a collaboration with Abitare Baleri in Bergamo, studying a collection of home furnishings. In 2003 he was Professor at the Brera Art Academy in Milan. In Switzerland he held lessons at the HEAA Watch School in La Chaux-De-Fonds. He directed the Sommerakademie in Plauen for the restoration of the park dedicated to Martin Luther. From the same year he was appointed president of the Free Artists Association of the Province of Varese. In 2004 he coordinated the "Living Venice 3" project at the IUAV University in Venice. Commissioned by the Wilhelm-Hack-Museum he created the project for a large sculpture of 10 metres for the square adjacent to the museum. He was elected Honorary Member of the Royal Designer for Industry (London). In Germany in 2005 he held an important anthological exhibition of art and design at the Europäisches Industriemuseum in Plößberg and the Fürstenberg Museum. He inaugurated the new Ritter Museum in Waldenbuch with a one-man exhibition. During the same period he inaugurated his project for the Piazza Montegrappa in Varese. In 2007 he planned the architecture of the Das kleine Museum cultural centre in Weissenstadt (Germany). In 2008, in concomitance with the Biennial of Architecture, the Ca' Pesaro Museum in Venice housed an important exhibition which the following year was reproposed and amplified in the venue of the Neues Museum in Nürnberg.

In 2010 he inaugurated his 11 metres sculpture as the symbol of the Europäisches Industriemuseum in Plößberg, tribute to Philip Rosenthal. In Varese he founded "Artparty" to promote the culture of the region. He held a retrospective exhibition at the Casa del Mantegna in Mantua. In 2013 he partecipated to the International Biennal of Sculpture in Racconigi. In 2014 he applies himself in designing two important personal exhibitions, one in Kunstmuseum of Bayreuth, in Germany, and the other at the National Gallery of Modern Art of Rome. In 2015, he took part in three exhibitions show-casing three cultural themes: in Munich at the Renate Bender Gallery with "Black and White"; in Waldenbuch at the Ritter Museum with "Ein Quadrat is ein Quadrat", and in Konstanz at the Galerie Geiger to celebrate its 40th anniversary. They were followed by three exhibitions on various themes in Varese at the Castle of Masnago, in Lugano at the Cortesi Gallery and at the Museum of Art in Fukuyama, Japan. In 2016, he was involved in nine one-man shows: seven held in private galleries - in Italy in Venice, Milan, Bologna and Verona; in Austria in Graz and Vienna; in Germany in Konstanz - and two at art fairs in Verona and Padua. He also teamed up with Marco Orler that year in a collaboration prompted by mutual esteem. These shows were designed for various settings, not primarily with a view to mere prestige, but because each was important as a way of understanding places, customs, human values and differing professional skills.

Although, in 2017, he will not be participating in shows at the 2016 galleries, his first high-profile exhibition of the year will be held at the MA*GA Museum in Gallarate from 12th March to 16th July, when he will officially confirm the opening of the Marcello Morandini Foundation and Museum. Most of the year will be devoted to renovating and completing the premises in the centre of Varese and to finalising his complex autobiography-cum-catalogue raisonné, which will be published in time for the inauguration of the Museum at the end of this year.

An important personal exhibition at the Scuola Grande della Misericordia (Venice) is underway until the end of April.

marcello morandini | we are form...