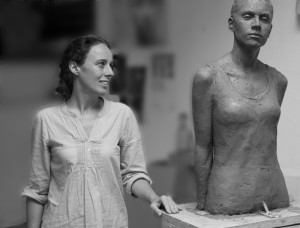 For Jeanne Isabelle Cornière, sculpture is a serious exercise useful for exploring human nature, with a special focus on the themes of childhood, time and memory. In the formal development and execution of her work, Cornière works with live models, from which she takes drawings, photographs and paintings. The synthetic and pure aesthetic, dominated by the timeless white of the resin (or chalk) is interrupted only by small coloured elements or objects (glass, paper, resin) that form the symbolic key and allow us to understand the meaning of her works. Her figures emanate a graceful silence and a deep presence, which invite the viewer to stop for a moment.

Jeanne Isabelle Cornière was born in Paris in 1974. After graduating in Art History from the University of the Sorbonne, she studied drawing at the Russian Academy in Florence, and sculpture in the studio of the master V. Ventimiglia (Academy of Fine Arts in Florence). She was twice finalist of the Arte Mondadori Prize (2008-2009) for both painting and sculpture. She has exhibited her works in many solo and group exhibitions in Italy and abroad (Miami, London and Paris). She lives and works in Florence.